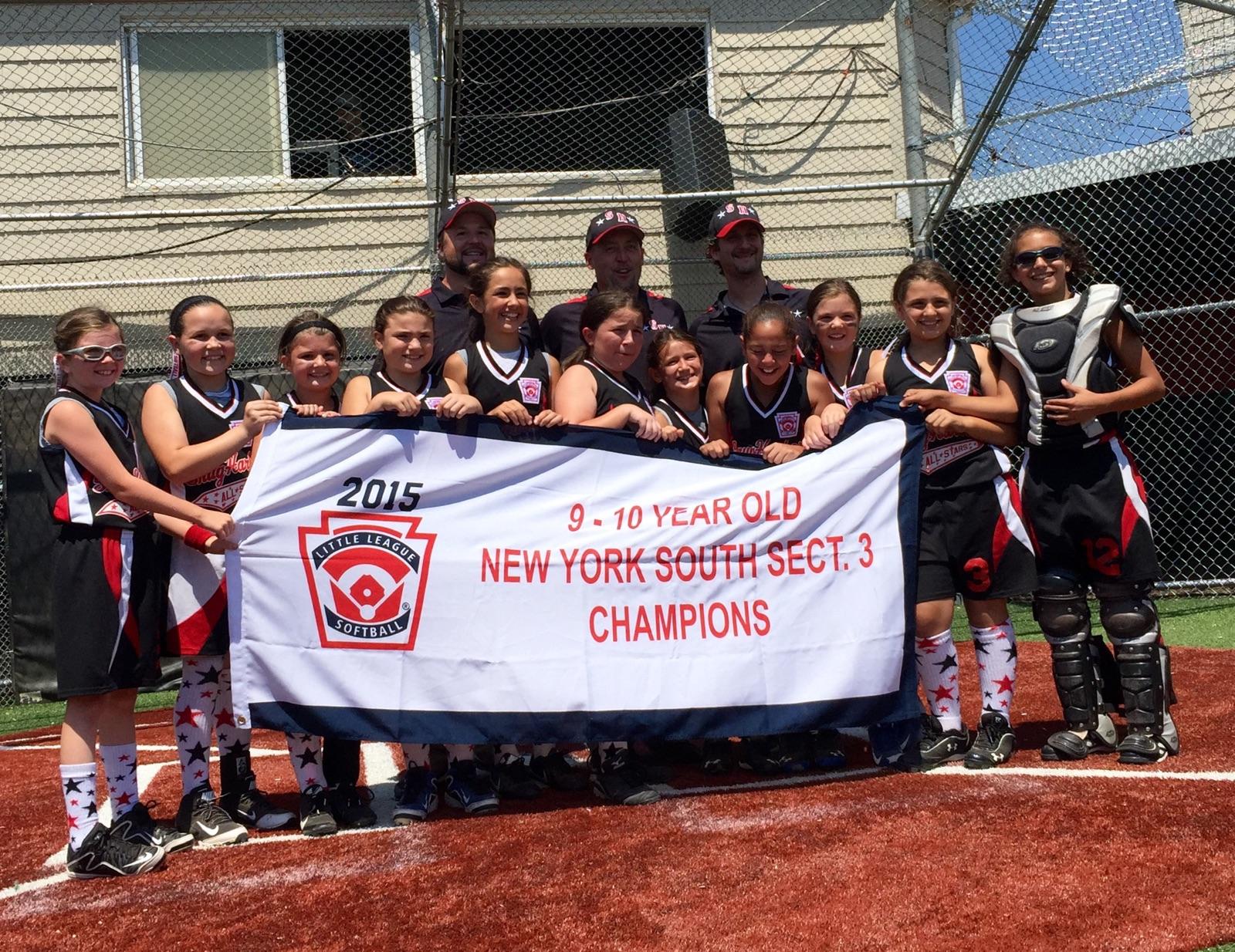 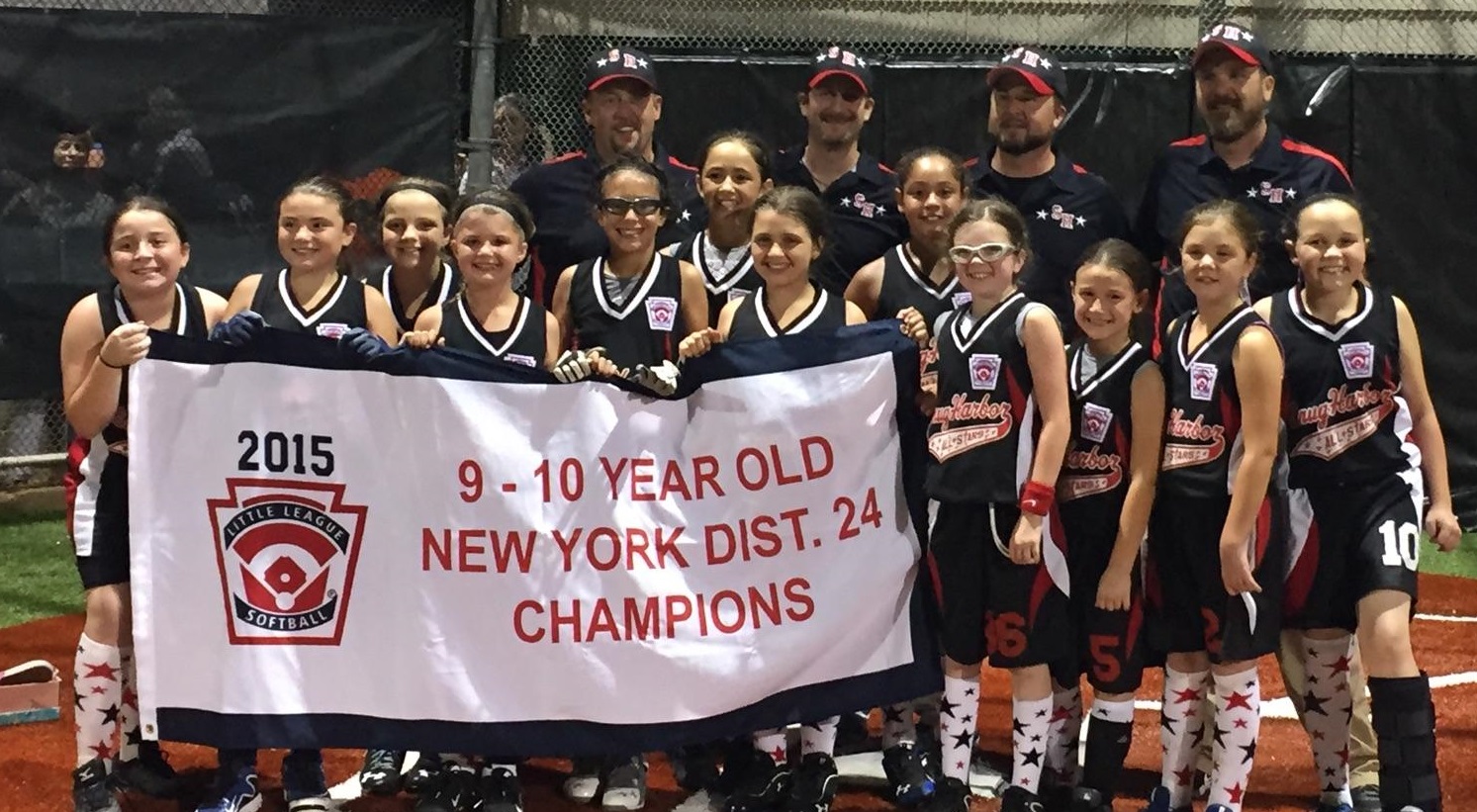 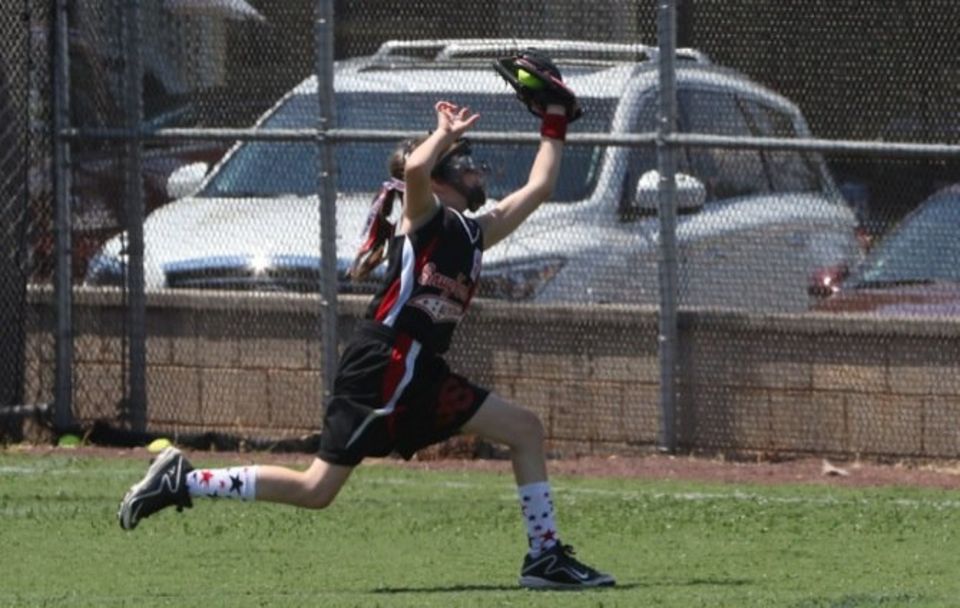 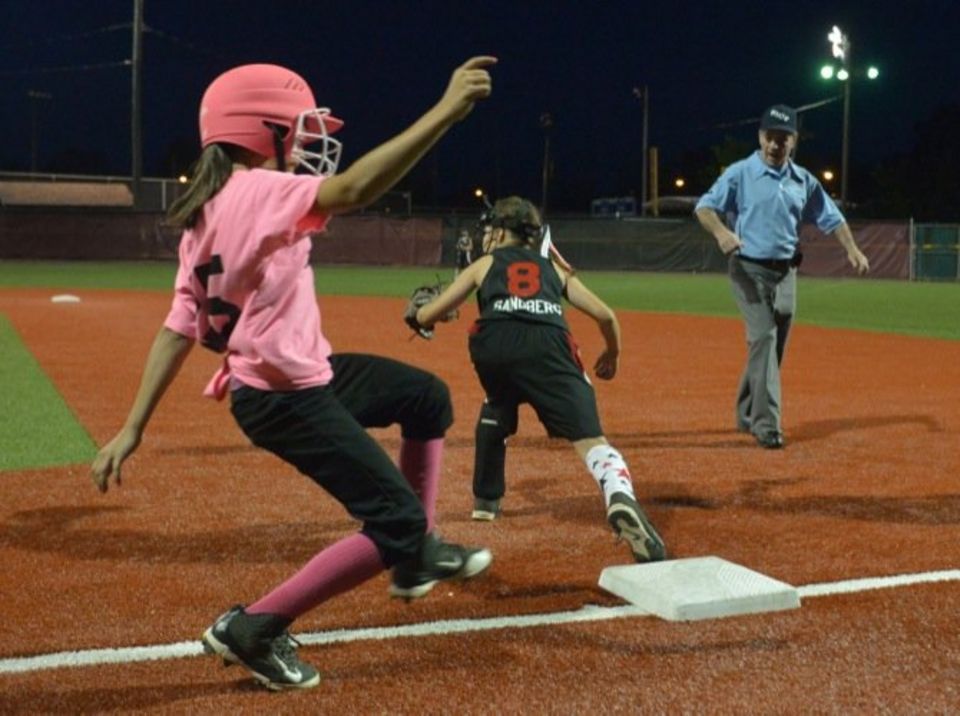 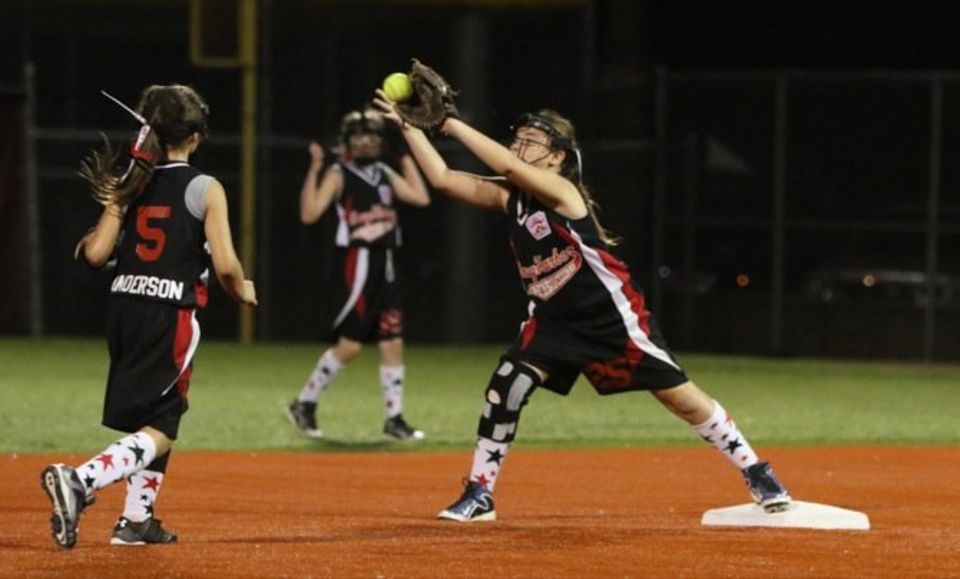 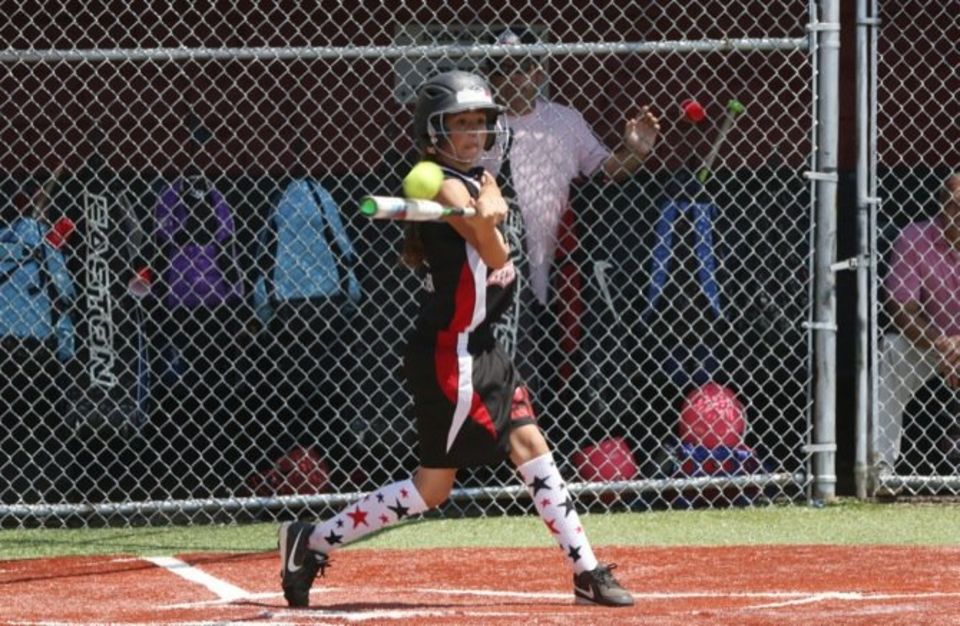 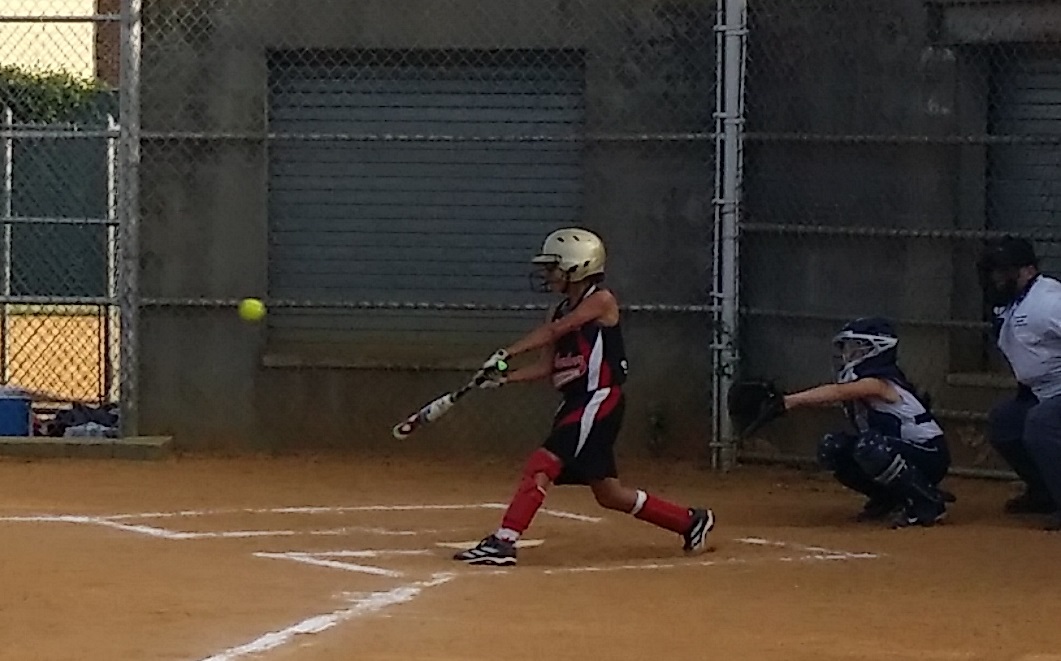 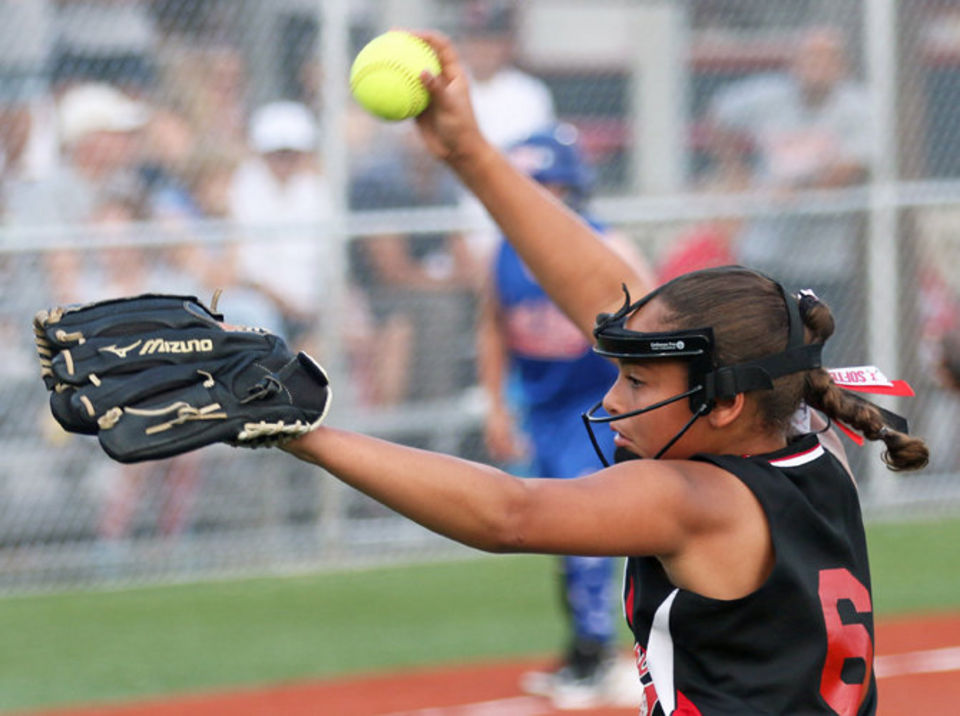 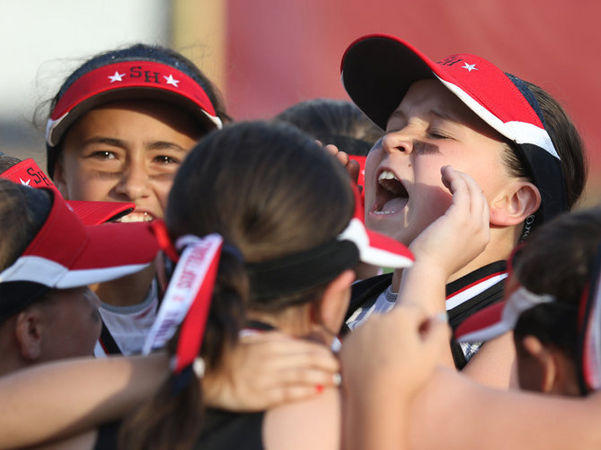 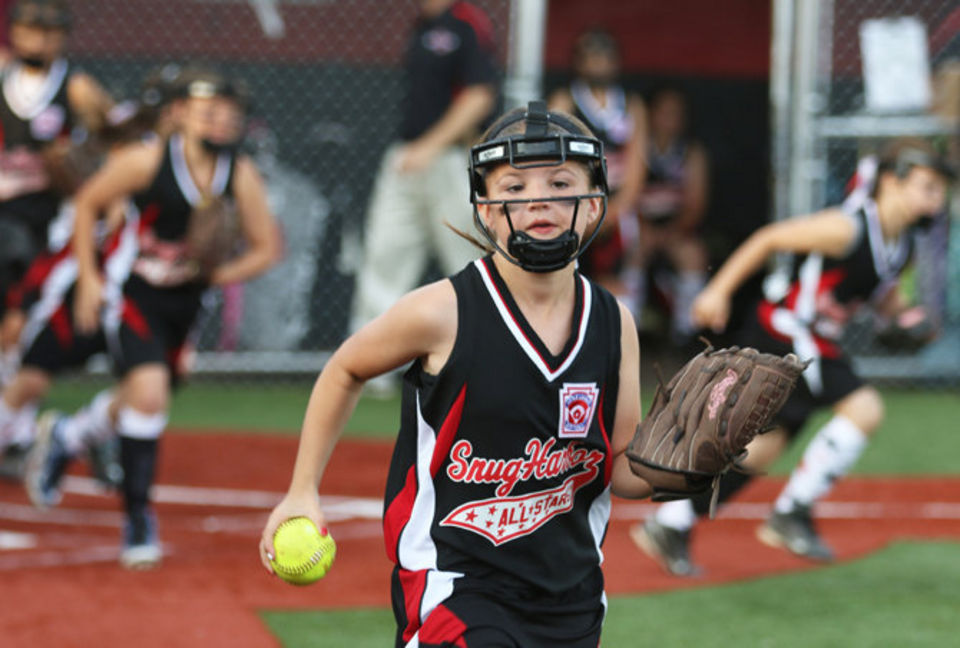 There was no quitting for the Snug Harbor 10-year-old All-Star softball team.

After a 5-1 victory Thursday to force a deciding game, Snug Harbor rallied and scored eight runs in the fourth inning to defeat Ozone Howard, 12-4, Saturday and capture the Section 3 championship title to move on to state play.

"It was an amazing comeback win," said Snug Harbor manager Steve Sandberg. "I'm so proud of each and every one of them."

The two teams will meet again in the championship Saturday at 11 a.m. at GKLL.

Winning pitcher Kelly Baker had a dominant performance as she went the distance, striking out eight batters and scattering four hits.

"We're excited to get a rematch against them," said Snug Harbor manager Steve Sandberg as his team lost 6-3 in a previous game to Ozone Howard. Snug Harbor will have to beat Ozone Howard twice to capture the sectional crown.

After a shadowy start -- no pun intended -- to the game at Great Kills Little League without power until the third inning, Snug Harbor was held hitless in a 6-3 Section 3 All-Stars softball loss to visiting District 23 winner Ozone-Howard Monday.

"Plenty of opportunities," said SH manager Steve Sandberg. He remarked that the jitters were present Monday night from winning the Island last week.

"We just tried to keep the girls on their toes," said Snug Harbor coach Steve Sandberg, whose team next plays Sunday at 11:00 am. against the South Shore. "It's a six-inning game and you have to finish them all to win."

Baker struck out 13 while going the distance on the bump, but it was her heroics on the basepaths that propelled Snug Harbor to victory.

With two outs and the bases loaded in the home-half of the sixth inning, Baker took off from third on a delayed steal -- swiping home to pull off the incredible walk-off victory.

Congrats to Coach Fitzgibbons, Reilly and Lotito on the great job their team did in the Tournament.

Mike Bianco had his fingerprints all over the game as he blasted two homers and tossed two scoreless innings as the Snug Harbor 11-year-old All-Star team handed South Shore Americans its first loss of the District 24 Tournament, 5-3, Saturday at South Shore LL .

"If it wasn't for Bianco we might be packing up and enjoying the summer but we live for another day," stated Snug Harbor manager Kevin Fitzgibbons.

With the win, SH emerges from the losers' bracket and advances to the championship round Saturday at 11 a.m. against South Shore American. The Snugs will have to beat SSA twice to claim the banner.

"We're excited to be in the championship round. SSA is a good team and knocked us out last year, so we're excited to go back at them again," said SH manager Kevin Fitzgibbons.

Boyle helped himself with a homer in the first inning to put SH ahead, 1-0.

In the third inning, Mike Bianco singled to score Jack Lotito and increase the lead to 2-0.

GKN scored its lone run on a walk and two errors in the sixth before Bianco came in to close the game.

Snug Harbor advances to Thursday's losers' bracket final against Great Kills National. The winner of that game will have to beat the South Shore American squad twice to claim the district crown.

Snug Harbor plated five runs in the top of the fifth inning to erase a 3-0 deficit and then held on for a 5-4 Little League District 24 All-Star baseball tournament victory over South Shore National Friday night at South Shore LL, Tottenville.

Snug Harbor hurler Jack Boyle survived a shaky first inning in which he allowed three runs. After that, he was sensational.

After that first inning, he shut them down," said Snug Harbor manager Kevin Fitzgibbons, whose squad will meet the winner of Sunday's Mid-Island-Staten Island LL on Tuesday at South Shore at 7:30 p.m. "He threw 31 pitches in the first inning, but he was great the rest of the way."

Christian Russo had such an effort for Staten Island in its Little League District 24 11s baseball All-Star tournament victory Sunday over Snug Harbor.

The decision sends Staten Island into a winners' bracket contest Wednesday night at 7:30 against Great Kills National. Snug Harbor falls into the losers' bracket and will play Friday at 7:30 p.m. against an opponent yet to be determined.

"It was a great pitchers' duel between Christian and (Jack) Fitzgibbons," noted SI manager Don Nesensohn.

"Both pitchers had good games. (Russo) threw strikes and his defense made all the plays behind him in the field," said SH manager Kevin Fitzgibbons. "Their defense just did a better job than ours today."

"We wanted Christian to go deep into the game," said manager Nesensohn. "He was hitting his spots today, especially against their big hitters. We knew Snug Harbor was a great hitting team because we lost to them as 10s last year." 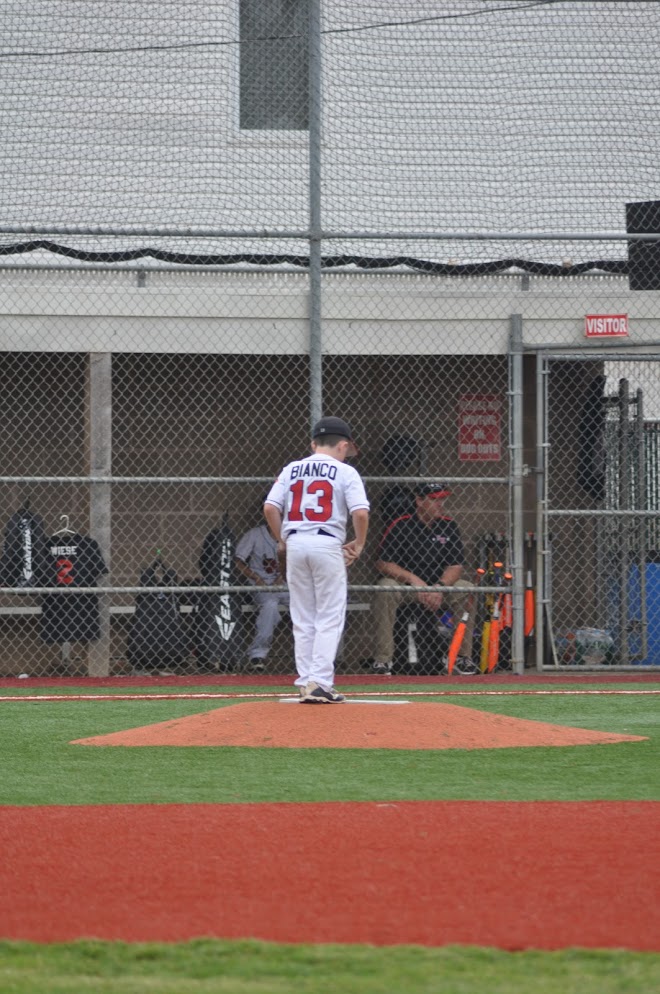 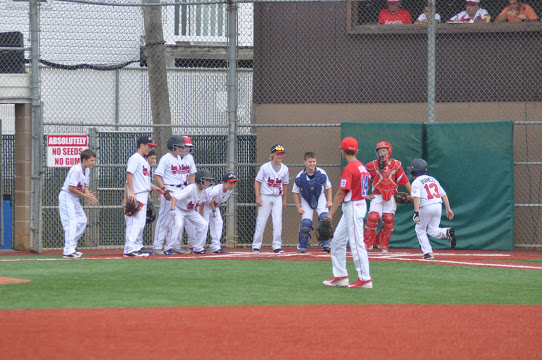 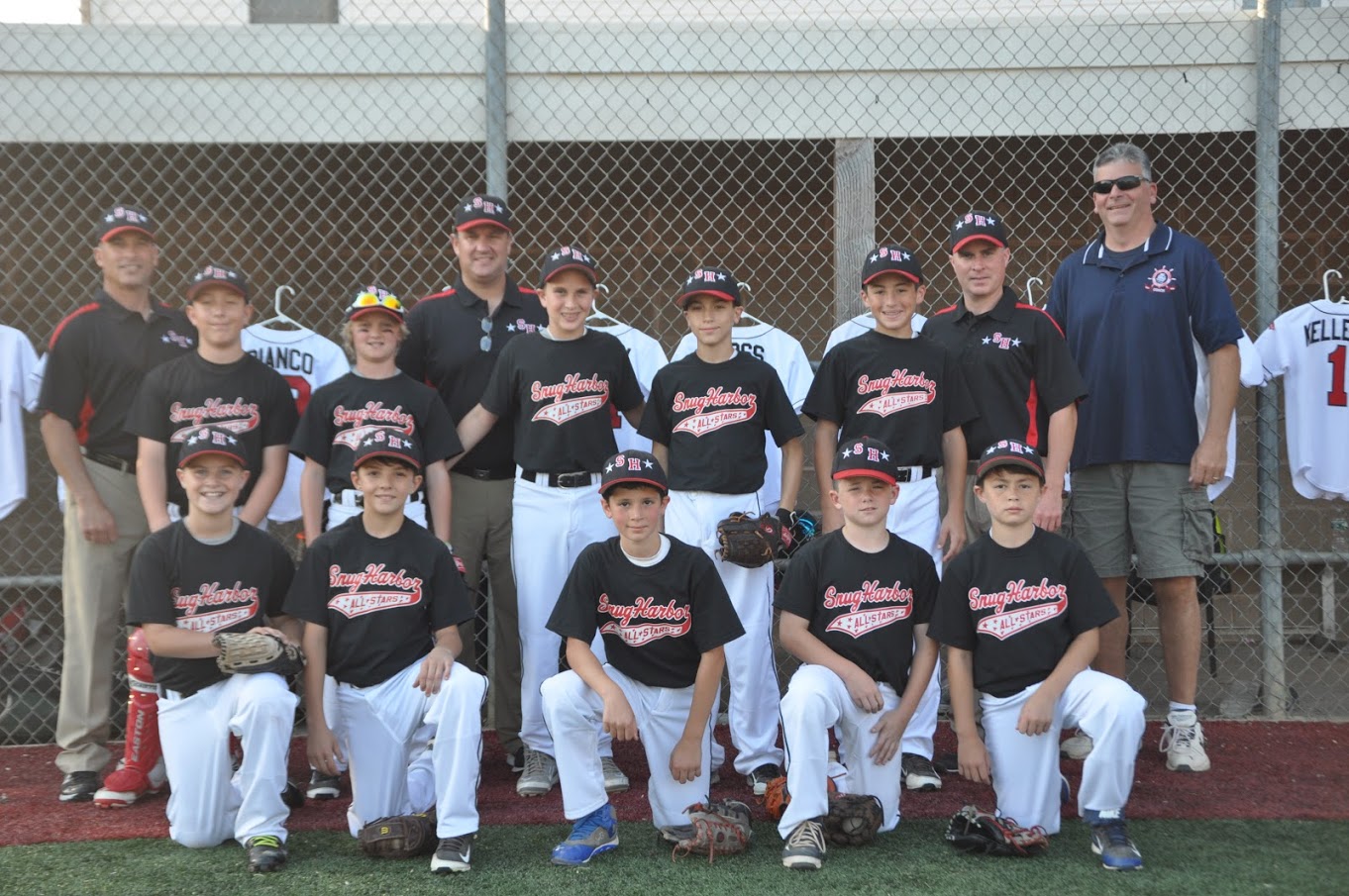 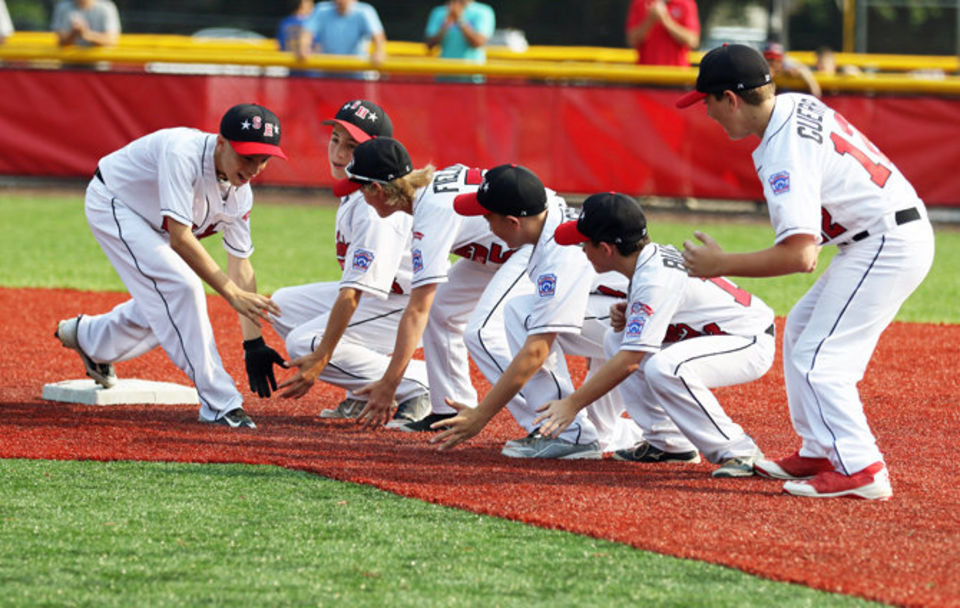 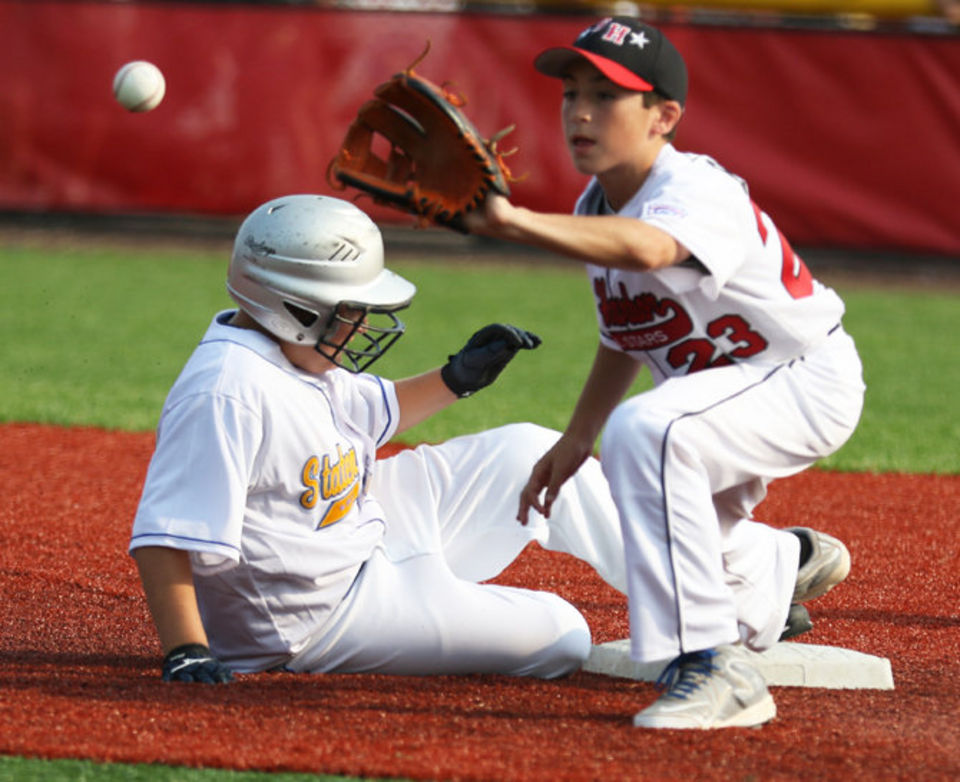 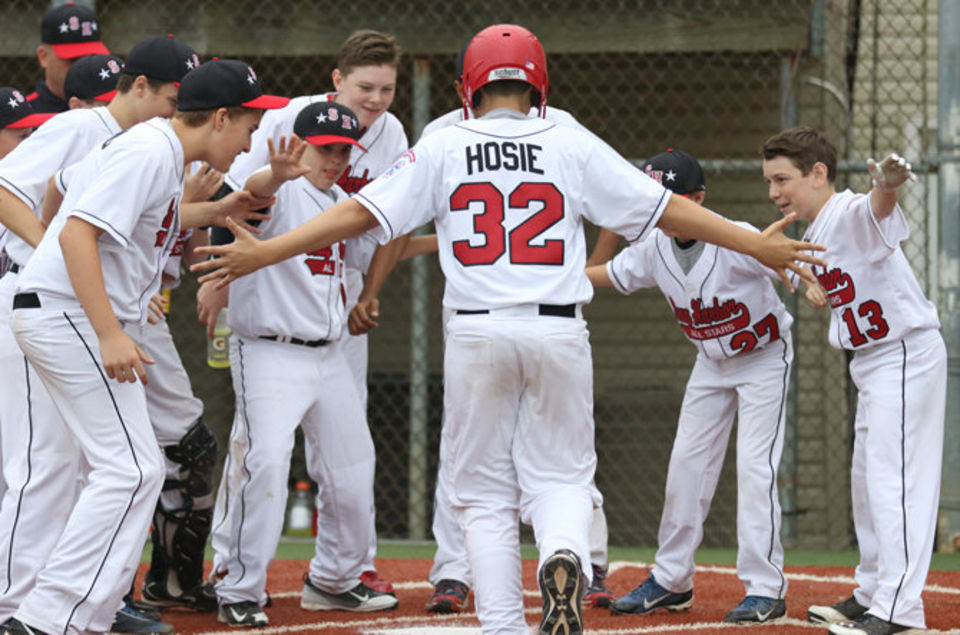 At least for one day, the Livingston loop should have changed its name to Slug Harbor.

Damon Anthony belted two of Snug Harbor's four home runs in an impressive power display Saturday en route to an 11-4 victory over host Great Kills American in the opening round of the Little League District 24 All-Star baseball tournament.  Game #3 will be at Snug Harbor on Wednesday July 1 @ 5:30

Click this link for entire store and more pictures

Snug Harbor will take on undefeated South Shore Monday at 7:30 p.m. and must beat the tourney hosts twice to capture the Island title. 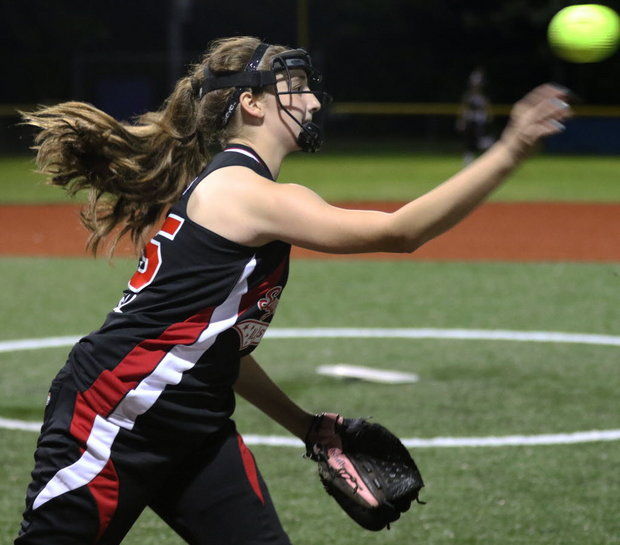 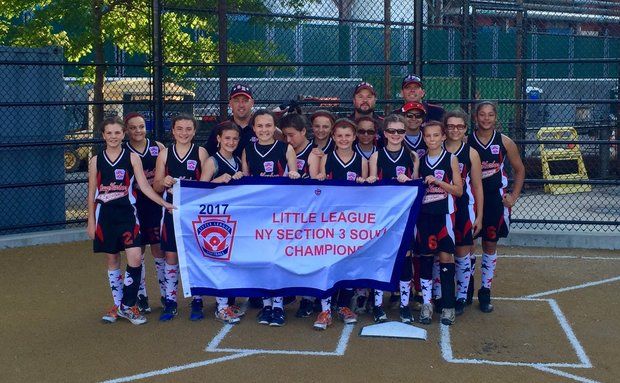 The Snugs will move on to State play on Wednesday in Fishkill, NY.

Kelly Baker piled up seven strikeouts in a complete-game effort on Wednesday, surrendering just one hit.

"She settled in and threw a great game," noted SH coach Steve Sandberg. 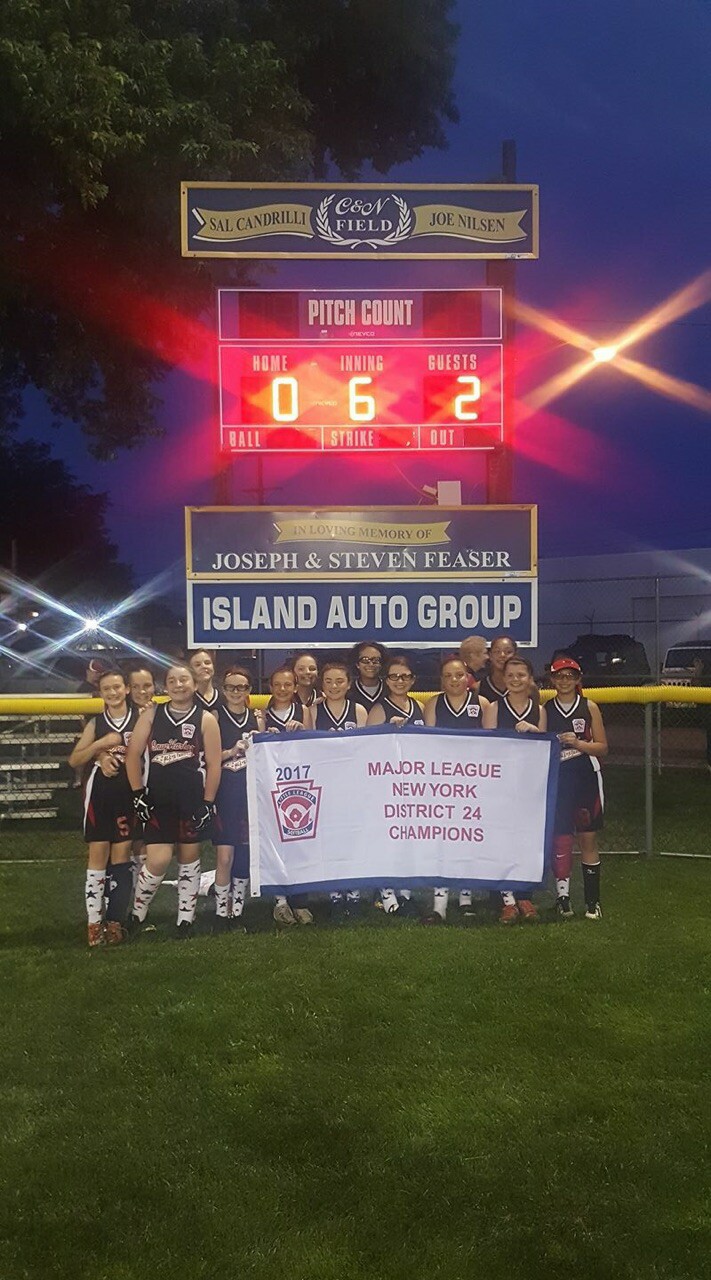 Championship Game : Snug Harbor and South Shore met for the second and deciding game in the championship round for the third consecutive year on Wednesday at Staten Island LL.

And for the third straight year, Snug Harbor was victorious with a 2-0 win to complete the three-peat and capture the District 24 12-year-old All-Star softball tournament crown.

"It was incredible to win the championship for the third year in a row," said Snug Harbor manager Steve Sandberg. "I couldn't have dreamed of a better scenario."

Snug Harbor, who was used to being in the drivers seat the previous two years, forced the deciding game after a 3-2 win on Tuesday after dropping a 2-1 decision on Sunday.

"To come out of the loser's bracket and win two in a row against a tough, tough team was incredible," said Sandberg. 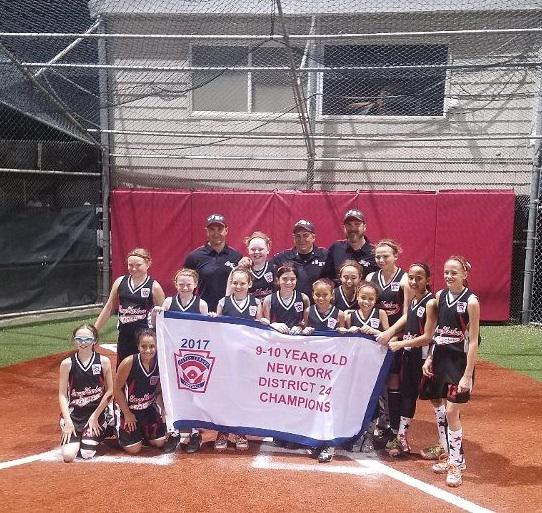 District 24 Crown as they go

Julia Rimshnick's performance on the mound and at the plate led Snug Harbor to a 6-2 decision over Great Kills in the opening round of the District 24 10-year-old All-Star softball tournament on Sunday.  Rimshnick fanned 16 in a two-hitter through six innings of work, while going 4-for-4 from the plate with one run and one RBI. Olivia Schmitt tallied three hits and three runs, while Olivia Pagano had two hits and two RBI.

Snug Harbor's Julia Rimshnick dismantled the Staten Island lineup to the tune of 11 strikeouts over four no-hit innings, as the Snugs cruised to an 11-0 win in the 10-year-old all-star softball circuit at the Great Kills LL complex on Friday. Rimshnick has recorded 27 of her last 30 outs via strikeout over her last two starts. The top four hitters in the SH order: Olivia Schmitt, Makayla Dansky, Kaleigh Fitzgibbons and Rimschnick teamed to go 8-for-9 with 10 runs scored and six RBI.

Kaleigh Fitzgibbons came in relief in the second inning and struck out 12 batters, while allowing just one hit to lead Snug Harbor past Great Kills, 10-5, to capture the District 24 10-year-old All-Star softball tournament crown Thursday at Great Kills LL.

Olivia Schmitt (three hits, four runs) led off the game for Snug Harbor with a base hit and scored on a passed ball.Starting pitcher Julia Rimshnick then ripped a standup RBI double to give her team a 2-0 lead.Great Kills would put three runs on the board in the bottom half of the inning on five consecutive walks to take the lead.But Snug Harbor would have an answer as Schmitt led off the inning again with a single, then Fitzgibbons and Rimshnick capitalized with RBI hits.Sophia Pepa recorded a RBI groundout to cut the deficit to 5-4 for Great Kills, but that would be it as Fitzgibbons stepped in and shut the door.In the fourth inning, Fitzgibbons made her impact on the game, this time at the plate, as she blasted a RBI triple. Rimshnick followed once again with her third RBI hit of the game.Snug Harbor opened up the game in the fifth inning as Caitlyn McTiernan led off with a standup triple, and would later score on a chase-down between third and home.Schmitt then recorded her third hit of the game with a RBI single, and with some heads up base running, advanced to third then scored on a throwing error. Great Kills' Reese Krosi broke Fitzgibbons' no-hit bid in the final inning with a RBI single.

Home of the 2016 State Champions

Home of the 2018 District Champions 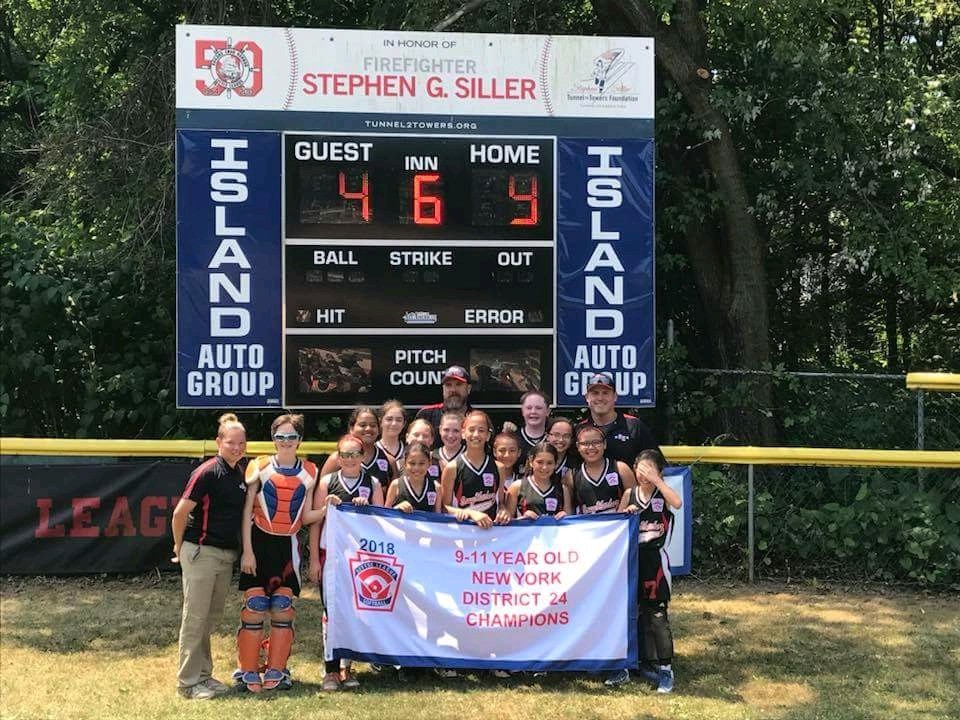 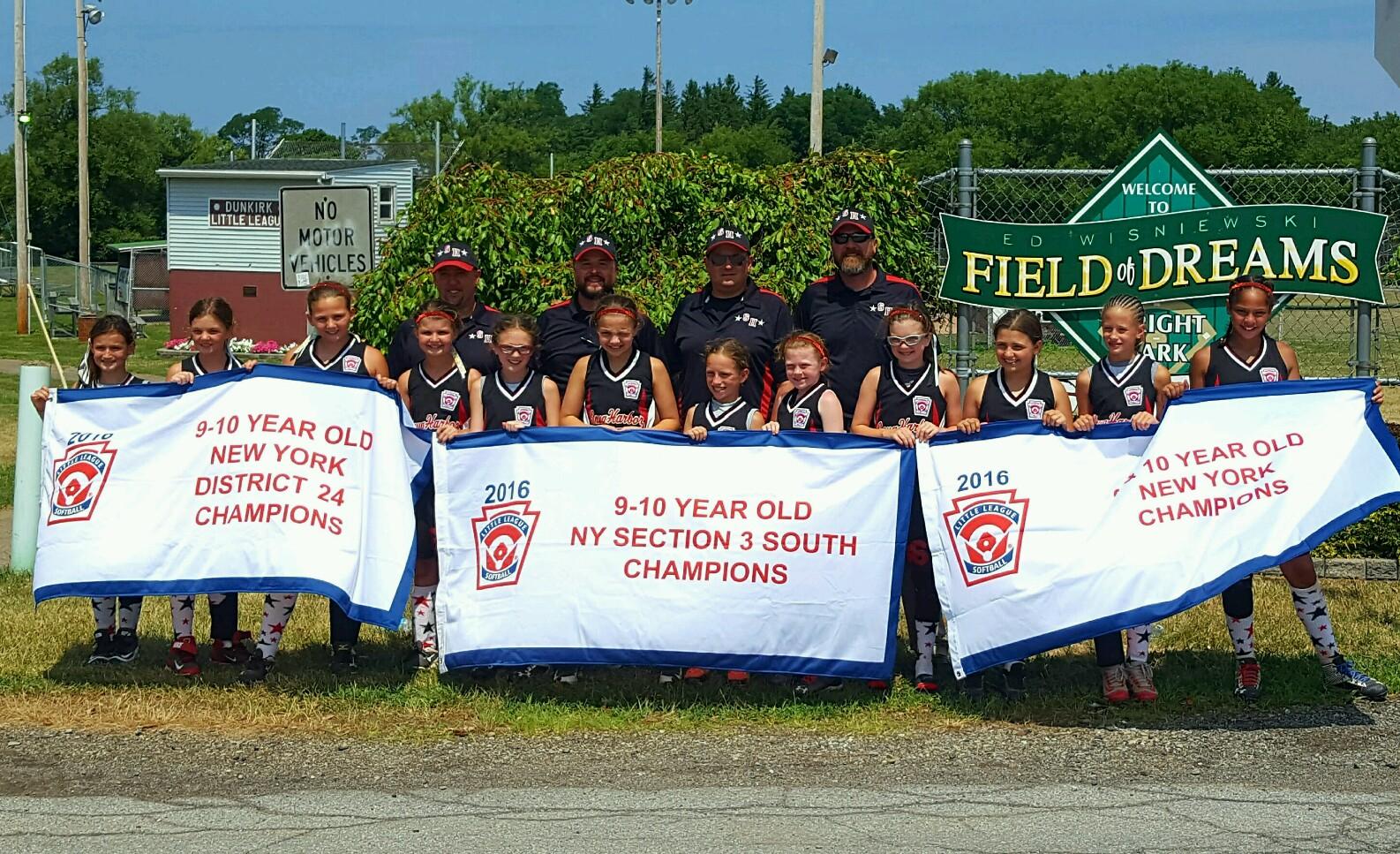